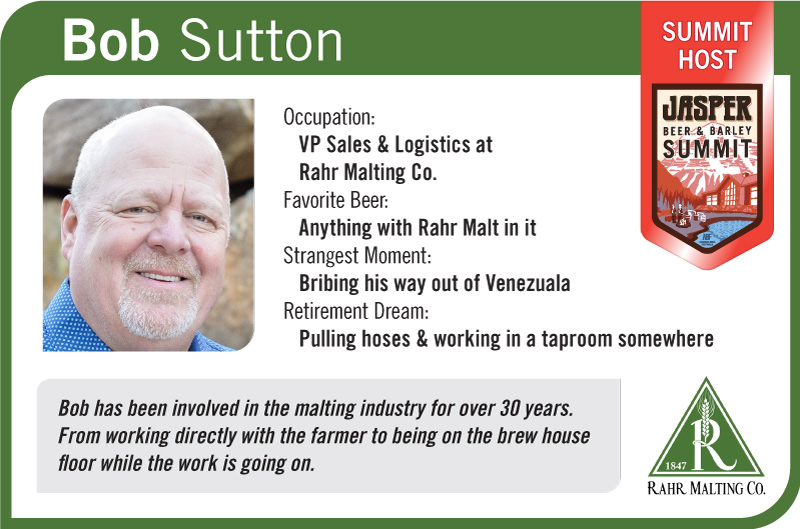 Bob Sutton has been with Rahr Malting Co. for over 20 years, and in the malting industry for over 30 years. He brings with him an abundance of experience and industry knowledge. Self-described as abnormally normal, his favorite beer is anything with Rahr malt in it. The highlight of his career so far has been getting the chance to be intimately involved in the industry at every stage – from working with the farmer to being on the brewery floor – each step is important. He’s bribed his way out of Venezuela, was the #2 ranked target shooter in Manitoba in 1975, and if the day ever comes for him to retire, he’d be happy pulling hoses and working in a taproom somewhere.

When we sat down to discuss the upcoming Jasper Beer & Barley Summit with Bob Sutton from RAHR Malting, he described himself as, “An abnormally normal guy. I’m a pretty open book.” It didn’t take long for us to realize he was far more than what he was letting on, and that two words that could accurately describe him would be humble and modest.

The first hint he might be more than just an ‘abnormally normal’ guy came when we asked him about his strangest moment in the industry. “Probably getting hustled in the Caracas airport by a guy and his immigration buddy that weren’t going to let us out of the country without paying a bribe. He looked official – he’s holding onto our passports and he’s asking if he has been ‘helpful so far’. My boss at the time tells me to tip him – so I hand him $20 – and he says, ‘You don’t understand – my friend and I have made sure you have had a safe trip so far.’ He wanted $100. I started to argue but my boss told me I could expense it so I handed it over.”

All of Bob’s education in the industry has come on the job – and it really is interesting the way he sort of fell into things. “I applied for two jobs in Thunder Bay – one at the grain mill and the other one at the paper mill.  The grain elevator called first,” Sutton laughs as he tells how things got started for him. “Later, I was working at the AB wheat pool doing grain inspections. A big part of that was analyzing malting samples – and you start to learn the process – the barley to the malting, then the malt into the beer. Beer had always been my favorite beverage, so it just made sense. It’s been a progression through various malting companies to where I am today. Looking back, if I hadn’t left Thunder Bay and moved to Calgary, none of this would have happened. The grain elevator was thinking about going on strike – I had a car payment to make – so without knowing anyone, I headed west to work for the Alberta Wheat Pool and haven’t looked back. It’s interesting – when I was at the grain elevator – I’d sample what was in the rail car, put a grade on it, and see all these town names – but when I got out here, I started really seeing the depth of the industry – and just how committed people were to it.”

Knowing how intimately tied he is to so many people in the industry, it is easy to understand why he is so diplomatic when answering questions about his favorite beer. “Anything with RAHR malt in it,” he laughs easily. “I’ve always enjoyed American style pale ale. I like them all top balanced – and I consider it a food group too. My first beer was a Blue – a stubby no less. My first craft beer was a Big Rock Traditional – the brewery had been open about a year, and I had it at Fueller’s restaurant – which later became Earls.”

His favorite things are just what you’d expect from this easy going man with such great character – and they say a lot about who he is. “I try and keep things relaxed in everything I do. Whether I’m working or laying on a beach. My favorite thing to do is to hang out with my grandson – greatest little kid ever. I honestly can’t get enough of him.”

We couldn’t be more excited that Bob is joining us at the Jasper Beer & Barley Summit to share his experiences, but he’s quick to point out that he’s happy to share because those who came before him imparted their wisdom onto him in the same way. “Art Frehlich was a mentor of mine. I worked for him twice.  He was the boss I referred to who was with me in Caracas. He never got stressed. He’d say, ‘Relax. It will work out.’ And he was right. The calmer you are, the more likely you are to be successful. The other thing he taught me was to always be asking the right questions when talking to customers. The answers might be things you don’t want to hear, but you need to ask because it is often the only way to improve.”

There have been a lot of highlights so far in Sutton’s career, such as travelling to Japan, Europe, and many other places around the world. “I’ve enjoyed the travel, but even more, I’ve enjoyed watching the growth of the craft beer industry and dealing with people who are intimately involved in the process – from the purchaser right on down to having discussions on the brew house floor while the real work is going on.” So how has it been to see the changes here in Alberta? “It’s been amazing – watching all the new breweries start up – and to be involved with them is great. Sure, we do most of our stuff internationally, but local is important – this is where I drink beer.”

Having been around this long has given him great insight into what works and what doesn’t. “If someone who was thinking about starting a brewery, or had recently, I would tell them that if they aren’t personally passionate about brewing, then hire someone who is. If the quality isn’t there, you won’t make it. It’s about the details. You can’t survive by selling one bad beer to everyone once. Better make it something they want to come back to. Just like with us – we try to be the most consistent, highest quality that there is out there in malt – we don’t shortcut our process. We’re a family owned company. We pursue the right farmers. We take great pride in the family name and we don’t mess with that reputation. We’re very dedicated to that. One of the hardest things about my job is telling a farmer his malt just doesn’t meet our standards.”

And what about someone getting into malting? “It’s great that there are so many little craft maltsters popping up – but I tell them, they better have a great story – beyond that they grow and malt the barley. Make it a special malt in a special way. Hard to survive on just local sales – and once you export it across the border, you aren’t local anymore – so you really need to have a story to penetrate that bigger market.”

Beyond the work, there are a lot of lessons he’s learned that can apply to almost every aspect of life. “A lot of the stuff I thought was important early on doesn’t mean crap. Family and friends mean everything. And if you’re not enjoying what you do, do something else.” When presented with the chance to have a beer with anyone, anywhere, any time in history, Sutton doesn’t hesitate. “Marilyn Monroe and I think the reasons would be obvious.” He then adds, “If our malt were someone famous from history, I would say Winston Churchill – he had that steady performance – no matter what – he was reliable.”

People who are passionate about their job, like Bob is, often have this exact answer when asked where they see themselves in the future. “Probably here doing the same thing hopefully. I love it. And if someday I do retire, I’d love to be working at a brewery – pulling hoses, cleaning tanks, pouring the taproom.” And when he’s finally gone someday, what does he hope people will say about him? “I’d want them to say it was good to know me – and that I was always there for the beer.”

Alberta Beer Festivals hopes you will join Bob and the rest of the amazing industry professionals at this year’s Jasper Beer & Barley Summit. 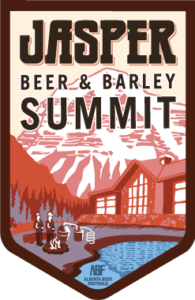 The Jasper Beer & Barley Summit, hosted at the world renowned Fairmont Jasper Park Lodge, is part industry gathering and part beer festival. It’s the perfect environment to network with craft beer & distillery leaders, as well as key influencers who will speak about how to grow these industries during the day, then during the 2 night festival, sample amazing craft beers and spirits, as well as culinary sensations prepared by JPL’s incredible chefs! Think League of Super Heroes, but more chill, brewer/distiller super powers, and way, way, way more beards.

Whether you are a current or future brewer/distiller, someone who is really into the beer/spirit scene, or just someone who loves adventures and new experiences, the Alberta Beer Festivals team has put together something for everyone at the Summit. Whether you are listening to successful brewers and distillers from across North America tell their stories, listening about ways to build your brand and increase sales, or hearing from former NHLer and business leader Charlie Simmer as he explains team atmosphere and how it pertains to success in business, you’ll be glad you decided to join us.