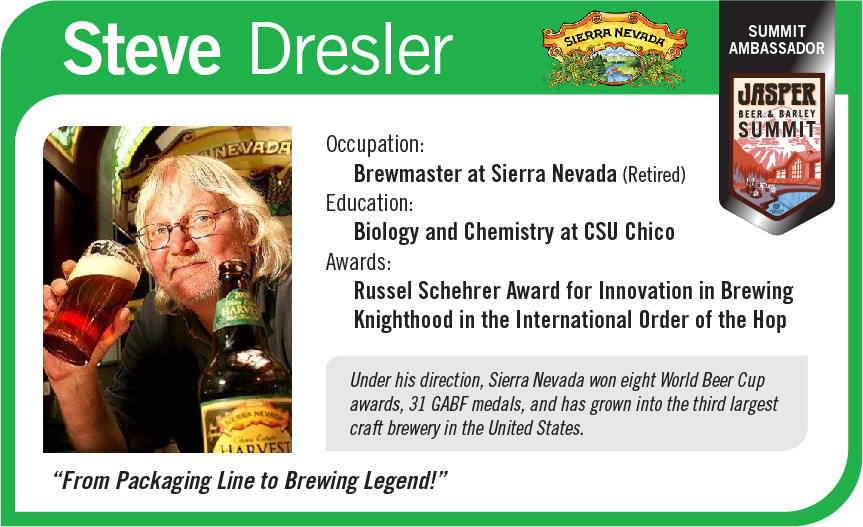 As one of Sierra Nevada Brewing Companies first employees, Steve Dresler has been at the helm of their operations since 1983. As a student of biology and chemistry at CSU Chico, Steve found his calling while homebrewing. Under his direction, Sierra Nevada won eight World Beer Cup awards, 31 GABF medals, and has grown into the third largest craft brewery in the United States. He has overseen the development and production of almost all their new beers for more than thirty years and is now revered as one of the world’s most beloved brewmasters. Steve has championed the craftmanship and artistry of modern hop-forward styles and techniques while pushing the boundaries of craft beer. Steve was awarded the Russel Schehrer Award for Innovation in Brewing in 2015, and in August of 2017 was awarded a Knighthood in the International Order of the Hop, the first American brewmaster to ever receive this honor. After more than 34 years, Steve is now enjoying his much-deserved retirement in California. Being able to meet Steve and hear his story will be one of the highlights of the Jasper Beer & Barley Summit being held at the incredible Fairmont Jasper Park Lodge.

Steve Dresler is a living legend in the craft brewing world, and you might be his role model. “I don’t know that I have a specific role model,” Dresler says shortly after we sat down to get to know him better in anticipation of the upcoming Jasper Beer & Barley Summit. “You learn from every person you meet. Everyone who comes into my life has something to teach me.” See, you could be his role model – if you ever got the chance to meet him.

There are a lot of lessons he has learned along the way. “I graduated from college with a background in biology and chemistry. It wasn’t until the end of college that I began doing some home brewing. Then when I got laid off from my job, I worked at a home brew shop. Not long after, I heard they were hiring at the brewery (Sierra Nevada). I got a job in packaging to start then worked my way up. I did some short course work at UC Davis and studied at the Siebel Institute in Chicago.” Steve laughs good-naturedly when we ask him how he got into brewing. “I needed a job. Once I got into Sierra Nevada, everyone was so passionate. The environment was a combination of science, art, and creativity – I just loved it.”

Learning is a two way street, and Dresler has always known this. “I was actually going to be a teacher. I was thinking about being a high school science – of course, once I got into the brewery there was no going back. One of the things I tried to do during my career was to mentor people as much as possible. In my now former position, I had the opportunity to talk to a lot of young brewers – on my own staff as well as at other breweries.  It was always something that was very important to me.”

So the man who once got a tip of a Schlitz beer as a tip while working at a health spa in high school has tips for others as well. We asked what he might say to someone thinking of starting a brewery. “Have fun. It is one of the greatest industries you can get involved with. It all goes by so fast. Stay true to you. Make a good quality beer. It’s not about the money – make quality beer and enjoy the journey. Enjoy it – it goes by so quickly.” And does he think he took that advice himself? “I ran into special moments all the time! When you have a career like mine, you encounter challenges all the time. I used to tell my staff a story – one time during wage review time, I was driving home and saw a guy my age sucking sewage out of a sewer with a giant hose – it reminded me to enjoy the path I was on because that could just as easily have been me. Perspective.”

It might be easier for Dresler to keep a positive experience considering how incredibly successful his career has been. “There have been so many highlights. I’ve been lucky to travel around the world and have incredible brewing experiences. The trips, the people, the ability to create incredible beers are all right up there. I was the first brewer to do a wet hop beer, so that was something I am proud of. And maybe the most special experience came just recently when I was awarded a Knighthood in the International Order of the Hop – I am the first and only North American brewer to receive the award.”

Then again, not all his experiences have been pleasant ones. There were the obvious challenges that all successful people encounter. “As the brewery grew, the success presented different obstacles to overcome. I had to transition into my managerial responsibilities – I didn’t have the background or training – but that allowed me to develop my own style. As our staff grew, I had to learn to deal with different personalities. That’s another thing I would tell anyone starting out – manage your people by being fair and transparent. Treat your staff as you would like to be treated. Don’t be afraid to admit when you’ve made a mistake.”

And then are there are the moments in life that really get to us – that stick with us – that leave a dent in our souls. “If I could sit down with anyone, anywhere, anytime in history and have a beer with them, I would sit down with my friend Paul. He was a very good friend and we lost him a few years ago. I did not have a chance to speak with him before he took his own life – I would like to sit down with him and see if there is something I could have done to help. To be there for him when he needed me most.”

Having recently retired, it is a good time to look back on one of, if not the most, successful brewing careers in history. Maybe it is the modest start to his career that has kept Dresler so humble about all he has accomplished. “My brewing journey started with me working as a human case packer. Next came my move into the brewhouse, then fermentation and quality control after that. Big step up was management of those 3 areas in 1985. The brewery continued to grow, as did the number of staff. Over those years I was in charge of beer formulation, raw material purchasing, production – gave up filtration 8 or 9 years ago and then quality assurance a few years after that because it became its own team. We grew from a 2000 barrel brewery in ‘83 to me managing 45 people and over 1 million barrels just in the Chico facility (one of the 2 facilities Sierra Nevada operates). My journey has also taken me across the U.S. and around the world to places like Germany, the UK, Slovenia, the Czech Republic, Belgium, Scotland and more.”

You can hear the pride in Steve’s voice when he talks about what made his beers special. “I worked hard on every beer we made – but one thing that stood out to me was that we were doing bottle conditioned beers very early on – that made us unique – especially with the pale ale. It just wasn’t found in craft brewing – very innovative – the live yeast was a good antioxidant – it made us unique in the industry and gave some flavour and aroma.”

Dresler checkles at our next question about whether the journey was different than he thought it would be when he first set out. “When we started, we had no idea what to expect. No one was doing what we were doing – we had to find our way and break new ground. It has been very different than we could possibly have envisioned – but different in the greatest way possible.”

And when, hopefully many, many years from now, Steve leaves this world, he has ideas about how he will be remembered. “I remember being in a cab in Prague one night – and I was able to recite the most incredible epitaph. The next morning we knew we had loved it but we couldn’t remember it at all – probably had something to do with the fact we had been drinking absinthe.” Without access to that now forgotten eulogy, we have to go with what he thinks now, and you’ll be surprised to hear what he wants people drinking at his wake. “I guess I’d want people to say that I was honest, had good integrity, treated people well and lived a good life. As for what they should be drinking at my wake – anyone who knows me knows they should be drinking gin and tonics at the memorial.”

The Jasper Beer & Barley Summit is going to be incredible – and the chance to hang out with and hear Steve Dresler’s story is a once in a lifetime experience. Join us, and maybe you’ll get the chance to be one of this living legends role models too.