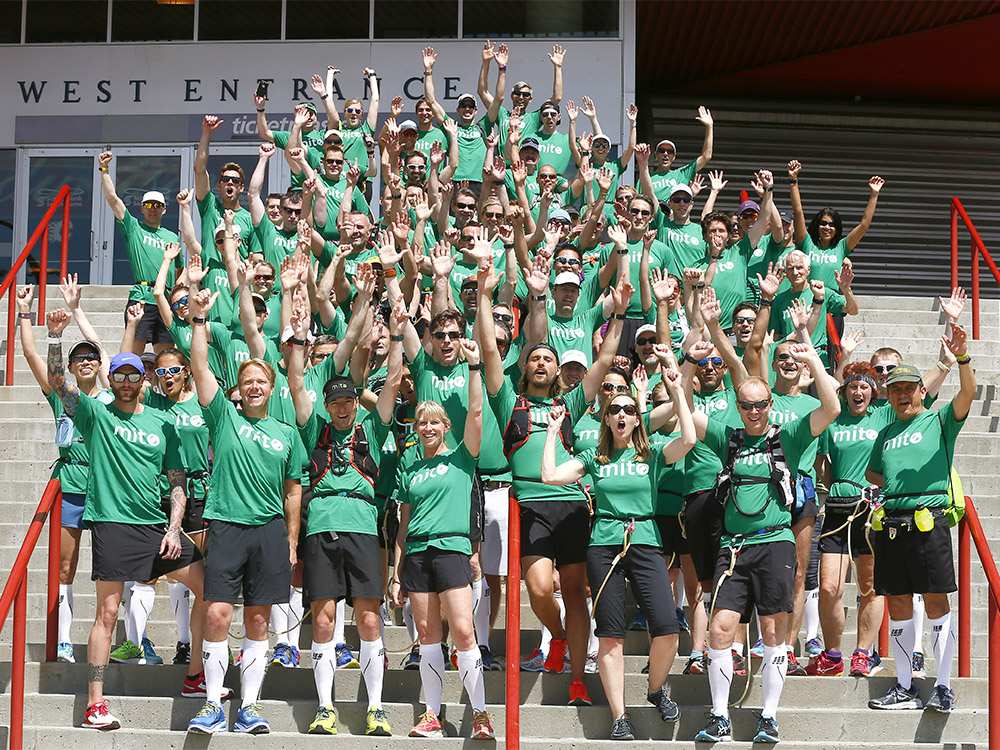 If you’ve ever run a marathon (or any other organized distance run), you’ll have seen some pretty funny signs along the way. Some of my favorites from this past weekend were, ‘This is the worst parade ever!’, and ‘Chuck Norris never ran a marathon’ – though there were many others that made me laugh.

Some of the ABF team, along with Graham Sherman from Tool Shed Brewing, joined 110 other people at the Calgary Marathon to break a Guinness World Record for most people tied together to complete a marathon – all in support of @MitoCanada @TeamMitoCanada – whom the group managed to raise their goal of $150,000 for.

The record is a really cool thing, and definitely special, but when I reflect back on the day, the thing that most stands out is the people who were involved. There was Jerry – an 80 year old who has run the Boston Marathon 11 times among many other runs, who was still bouncing and smiling at the finish line. There were also a lot of first time marathoners, one of them just 15 years old. And others who were pretty hard core runners, one of whom who finished 2nd place in a 10km race in Ottawa on the Saturday, then flew back to Calgary to take part in the record attempt. Some people travelled from BC or Saskatchewan just to be there for the run.

The day started at 5:30am – everyone had to find their place, get signed in by the people monitoring the record attempt, and double check their equipment. We didn’t start running until all the other marathoners had gone – so about 7:10am. Because we were such a large group, we couldn’t stop at the many water stations along the course http://kamagrawiki.org (manned by hundreds of cheering and amazing volunteers!). We had 3 separate stations set up just for our group at 12, 24, and 36 kms. We stopped at each station for 15 minutes (it takes a while to get that many people to pee all at once). Due to logistics and working together as a team, it ended up taking us over 6 hours to complete the race. For some, this was just a short training run for the ultras they were going to do in the coming months, while others were struggling mightily from early on in the race and were encouraged every step of the way by their team members.

When I look back later, I’m sure I’ll continue to think the World Record is a pretty cool thing even if someone breaks it – but the things I’ll remember the most are the people we did this with and why we were there. I’ll remember the cheering leading up to every kilometer mark, the singing of the national anthem as a group, the shouting every time we passed under a bridge, and the amount of positive energy emanating from such an incredible group of people. We were proud and humbled to be part of such an amazing group who were working hard for such a great cause.

And even though the group was able to raise their target goal and break the Guinness World Record, the fight against mitochondrial disease is far from over. If you can donate even a little bit, it would be greatly appreciated.

Thanks to Blaine and Sarah Penny for all they do – they are an inspiration.