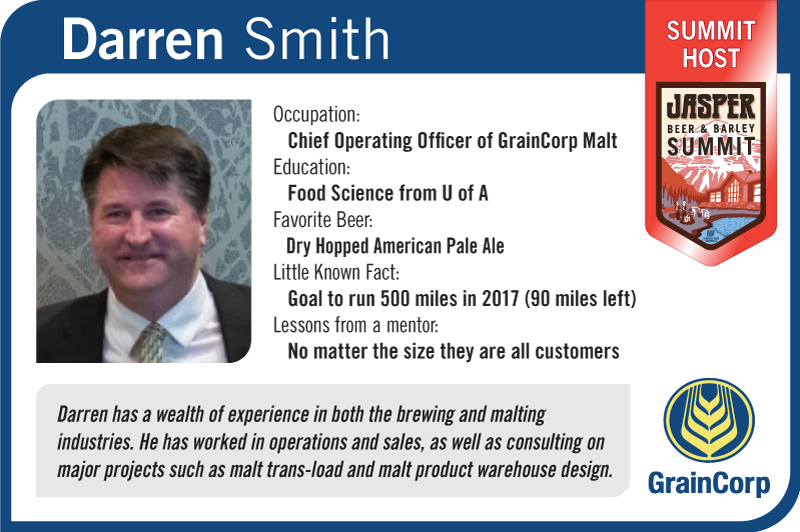 Darren Smith has been COO of GrainCorp Malt since May 5th, 2014, and brings with him a wealth of experience. Smith has worked in brewing and malting in both operations and sales, along with consulting on various projects including malt trans-load and malt product warehouse design. Prior to joining GrainCorp, Smith served as a Managing Partner with RMI Analytics, the leading provider of information to the barley/malt/beer supply chain, Labatt, Canada Malting Company, and Great Western Malting.

As one of the Hosts at the Jasper Beer & Barley Summit, being held at the Fairmont Jasper Park Lodge, February 2nd to the 4th, Darren will be speaking about ‘Innovations in Malting and an Overview of the Brewing Industry and How to Succeed In An Ever Changing Landscape’, using examples from throughout his business career.

“A malting super power?” Smith laughs good-naturedly when we sat down to get to know him. “It would be the ability to create new and interesting products that no one has ever seen before. We are at the cusp of that right now. The innovation and creativity. I guess my super hero name might be the Maltivator?”

All joking aside, since he graduated with his Food Science degree from U of A, he’s been at the forefront of innovations in the malting industry.  “Right from high school my drive was to get into the beer industry. I was a fan of beer very early in life – and since I really liked it, it made sense to make a career out of it. That drove me towards food science – and a teacher I had in high school suggested the program to me, though as I look back, I think she might have been thinking of the food side of things.”

A lot of Darren’s business philosophies have developed over time through experience and lessons learned, but some of them came from role models and mentors at an early age. “One lesson my father taught me was that no matter the size, they are all customers. Another role model was one of my early managers. He was very much a production guy, but the kind of guy who had a sales focus as well. He told me I could be whatever I want in the business – but that I had to remember that if you were in operations you were also really in sales as well and vice versa.”

During his journey, there have been highs, and there have been challenges. “One of the hardest things in business is getting everyone on the same page. If you’ve built a good team, they’ll all be intelligent and have their own views and opinions – strengths and weaknesses. The challenge is getting everyone on the same side. Canada Malting has been around since 1902 – and all the different brands we’ve acquired, we’ve kept independent but still joined together. There are only 10 of us in the Global Group – and you look at Bairds who will be 200 years old in 2023 – some of our brands have such a deep history and pride in what they do – people stay with these companies their whole careers – so we have to coordinate efforts among all our different parts.” There are always changes happening. “The highlight for me so far has been the emergence of the craft beer business globally. Early on in the late 90s, the industry was very stagnant with bigger and bigger breweries. Now when I think about the diversity of breweries globally, it is phenomenal. Personally, we are one of the 2 most diverse malting companies – so we are a natural fit for this growing industry. We bought a warehouse and distribution business in NZ and Australia – and we are going into other markets around the world.”

Smith has specific advice for anyone who is thinking about starting a brewery. “I think it is key to spend a lot of time on the business plan. You need to be realistic about your thought process – verify what is going on in the market – a lot of people have stars in their eyes about what their imagined brewery will be. That being said, if you are passionate and hard-working, you’ll build a successful business. I’d recommend taking the time to learn from others – most successful people didn’t reinvent things. That’s one of the big benefits of this summit.”

Along the way, life has had moments that just wouldn’t have happened if he hadn’t chosen the path that he has. “There is a lot to be thankful for. I was in my early 20s working at Labatt when one of my friends asked me to go travelling. If I’d stuck it out, I’d be a trained brewmaster, probably still there, hoping for my retirement package so I could do something else. Instead, I got the experiences from travelling and it opened a whole new world. I’m shocked by how long I’ve been in the industry. Like most things, it is the people you work with that end up coming in and out of your life over the years.”

“My strangest beer moment came at the Western final between Edmonton and Calgary a couple years ago. We couldn’t drink our beers fast enough because they kept freezing, And my job has taken me to lots of little interesting places like that. That’s why I love to run. It not only clears the mind, it’s a great way to see new places you are visiting. I guess something most people don’t know about me is that I have a goal to run 500 miles this year and I’m closing in on my goal.”

Though hopefully many years off, Smith thinks he knows what his legacy will be. “I’m a brewing scientist maltster who also does sales. I’d like to be remembered for being part of the next generation of innovation in the industry. And when they do finally lay me down, I think they’ll say I was honest to a fault – and I hope the people gathered round are drinking whatever they want.”

The Jasper Beer & Barley Summit, hosted at the world renowned Fairmont Jasper Park Lodge, is part industry gathering and part beer festival. It’s the perfect environment to network with craft beer & distillery leaders, as well as key influencers who will speak about how to grow these industries during the day, then during the 2 night festival, sample amazing craft beers and spirits, as well as culinary sensations prepared by JPL’s incredible chefs! Think League of Super Heroes, but more chill, brewer/distiller super powers, and way, way, way more beards.

Whether you are a current or future brewer/distiller, someone who is really into the beer/spirit scene, or just someone who loves adventures and new experiences, the Alberta Beer Festivals team has put together something for everyone at the Summit. Whether you are listening to successful brewers and distillers from across North America tell their stories, listening about ways to build your brand and increase sales, or hearing from former NHLer and business leader Charlie Simmer as he explains team atmosphere and how it pertains to success in business, you’ll be glad you decided to join us.