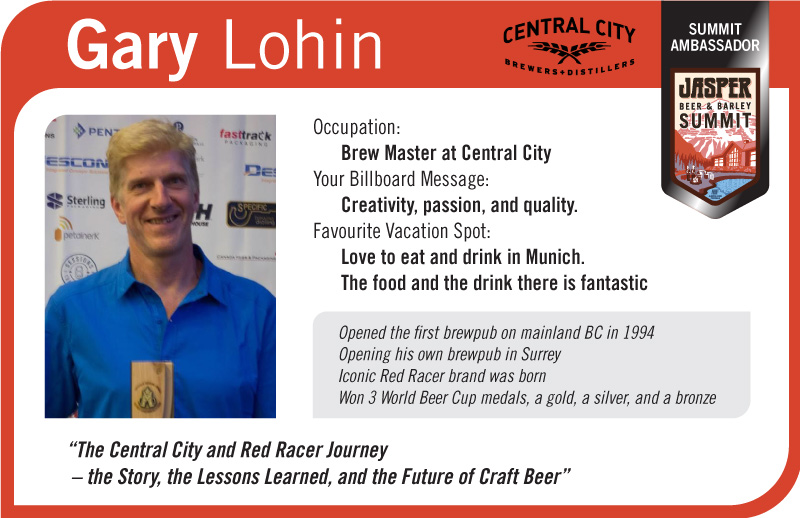 Gary Lohin, best known for being the Brewmaster at Central City, has a wealth of experience, accumulated from years of brewing innovation, hard work, and living with passion. Lohin’s brewing career started with him joining a home brewing club because he didn’t take to the beers that were out at the time. He then went on to brew for Whistler Brewing, OK Springs, and then opened the first brewpub on mainland BC in 1994, before finally opening his own brewpub in Surrey with partner Daryl Frost – which is where the iconic Red Racer brand was born. Lohin has won 3 World Beer Cup medals, a gold, a silver, and a bronze, and he continues to push the boundaries of creativity, passion, and quality. He has since also joined the growing craft distilling movement to equal renown.

As one of the Keynote Ambassadors at the Jasper Beer & Barley Summit, being held at the Jasper Park Lodge February 2nd to the 4th, Gary will be speaking about ‘The Central City and Red Racer Journey – the Story, the Lessons Learned, and the Future of Craft Beer and Craft Distilling’, using examples from both his business and brewing/distilling career.

Gary Lohin is as easy going as they come. “Favorite beer that isn’t my own?” he repeats my question with a laugh. ‘Easy. The one that is in my hand!” The answer might make you laugh, but it also makes you realize both how open minded Lohin is about beer and also just how much the craft brewing and distilling are true communities. “I love lots of different styles, and I’m always up for seeing what others in the brewing and distilling community are up to. There are also breweries like Sierra Nevada and Deschutes that I look up to. They’ve grown but kept their quality up – they are the benchmark for the industry. I can travel in the U.S. and see their beers almost anywhere. No matter what I have in my hand, I just try to analyze the beer or spirit – see the ingredients – I’m definitely more of a taster than a drinker.”

Lohin’s brewer journey, like almost anyone who achieves success, has taken years to get to where we are now. “It started for me back in university. I started home brewing because I wasn’t a fan of what was out there at the time – Granville Island and OK Springs weren’t out yet. When Whistler Brewing opened, I started there. Small world – Rob (the head brewer) from Brewsters was my delivery driver. After that I moved to Vernon to work with OK Springs. Their pale ale opened a lot of doors for breweries in BC – it was in every single pub. They broke down a lot of barriers. In ‘94, Swans and Spinakers were the only brewpubs on the mainland – so I was part of the first one in Northern Vancouver where I started experimenting with my own breweries. I was there for 9 years – then in 2003 I met Daryl Frost and together we opened up a brewpub in Surrey. That’s where Red Racer got started. I invested at that time so I became a partner – opened a new brewery in 2013 to handle the demand.”

When you think about iconic logos in the beer industry, Red Racer almost has to be on everyone’s list. “The girl on the bike was from an old painting. The artist allowed us to use the image. We made a graphic of it – and since the painting didn’t have a name, we brainstormed names and came up with Red Racer. At the time, it was a one off pale ale. We had no idea it was going to be our brand. At the time it was planned to be a one off pale ale, but sales took off. Then we had to ask whether it was the beer itself or the branding – so we changed it to the brand for all our beers and the sales for all our beers took off.”

It is sometimes funny how things work out. “I got married in ‘87 and I had piles of OK Springs at the reception – then later on I started working for them. Once I started there, I would brew and ski pretty much all the time – and I think that was when I decided that being a brewer was the life for me.”

As with all jobs, there are challenges he faces in his everyday work. “The hardest thing about the job is to keep this big engine running and keep the brand relative. I believe we make good beer – but you have to engage with consumers at an ongoing level. With all these new breweries, I have to be both consistent and innovative. Can’t rest on past experiences and successes. It is tougher as you get bigger. Challenges of shipping beer to Ontario and keeping it fresh. You have to know how things will behave after they are packaged. Maintaining quality as the scale of the brewery expands. We’re not even that big at 2000 hectolitres. People think we are big, but we really aren’t. We have to stay connected. We have to be a big brewery and a small brewery at the same time.”

On the flip side, there have been some absolutely stunning moments – moments that were obviously something Lohin is proud of based on the way he talks about them. “For me, the 3 World Cup Beer Medals – gold, silver and bronze. I’m proud to show we make excellent beer. Nice to know people out there think we make good beer. There are also the people who come home from work and opening one of our beers and makes their day – that is really worthwhile also.”Then there are things like having the opportunity to go to England a few times to make my beer. WItherspoons owns over 1000 pubs and they put us on tap as part of their international brewer program. That’s a pretty cool feeling.”

A lot of this is what comes after someone has put in quite a few years of very hard work. We asked Gary what advice he would give to someone just starting out. “I had no idea that I’d ever be opening as big a brewery as I did – or that the craft brewing movement would be as big as it is. You have to adjust to those changes. Things are growing more and more local. I’d tell people to be in it for the long haul – and for the right reasons. You are not going to make a quick buck. The right reason for me is passion – love what you do – work hard and be happy. There are a few other fringe benefits to being in the industry, but the work has to come first.”

And what legacy does Lohin think he’ll leave? “I’d want to be remembered as someone who gave the world good beer. And at my wake, I’d love to have IPAs all around there.”

Join Gary and the other amazing line up of speakers at the one of a kind Jasper Beer & Barley Summit.