GET TO KNOW YOUR BREWER…KENT ‘BOOMER’ PATERSON - Alberta Beer Festivals 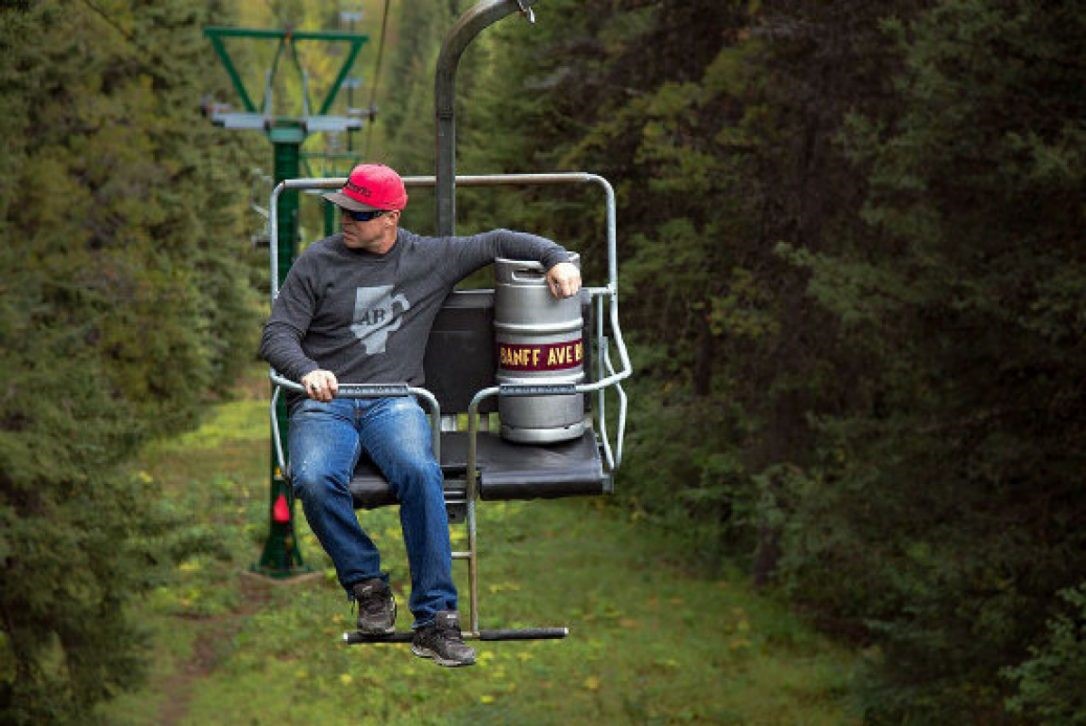 This month, we sit down with Kent ‘Boomer’ Paterson from Banff Ave. Brewing, to get his story, discover that every brewery in the world is haunted, and learn about his plan for the most unique ingredient in a beer we have ever heard about.

“All breweries are haunted,” says Kent ‘Boomer’ Paterson as he sips one of his own beers while taking a break from skiing at Lake Louise. “I used to think that was just something the other brewers said to the new guy – then one day, I went in early, 7:30am – turned off the alarm, and suddenly I heard a voice in my ear – a girl – screaming, ‘Get Out!’. I ran out of the building and waited for someone else to show up so they’d come back in with me. I don’t know of anyone who died in this building, but then again, this is Banff.’

Aside from the odd screaming poltergeist, Banff has been very good to Boomer. When you hear him talk about his passions, and day to day life, it’s difficult not to think this man is on to something. ‘A year from now? I hope I’m right here, brewing beer and being a firefighter. I love what I’m doing. I love what’s happening.”

And the people of Banff have definitely embraced what Boomer and his team at Banff Ave Brewing are doing. “It was about year 2 that I realized just how much the community had embraced us. We have our Wednesday night beer club – they try beers from all over the world – someone travelling will bring back beers from a trip for instance – I finally realised that they were using our beer as their basis for comparison – and everyone there was referring to the beer we make as ‘their’ beer – they really took ownership which was a great feeling.”

Banff Ave. Brewing is part of a 4 brewpub chain, each location unique to the region it operates in. One advantage Boomer said he has when he is brewing is the water he gets to use. “The water in Banff is perfect for making darker beers – the higher mineral content. We have the freshest water on the planet. The water we get is actually spring water – four wells at the base of Cascade Mountain – as pure as you can drink it – water treatment in Banff puts in the minimum chlorine by law – so pure they don’t really need to do anything with it.” And if one of his beers could be someone famous? “I’ve always thought our Banff Ave. Blonde was Marilyn Monroe. She visited Banff quite a few times – filmed a movie here. There are pictures of her up all over town. That beer embodies her.”

Boomer took a somewhat untraditional path to becoming a brewer. “I was playing senior hockey and was always drinking the beer at Jasper Brewing – fell in love with it. I played up there for 6 years – a player coach like Reg Dunlop (google the movie Slapshot if you don’t get the reference – or better yet watch it) – I became good friends with the guys. They’d always call at all hours, asking me to go out. One night they called really late and told me it was friends off if I didn’t show up. They had a bottle of champagne on the table – they told me they were opening up the brew pub in Banff.  There was just me and a really good buddy helping them with construction and renos – half the brew pub was built with tools from the fire department (Boomer is also a firefighter in Banff). We were close to finishing and Brett (the owner) asked if I knew anyone who wanted to be a brewer – I told him I wanted to give it a try. They’d been over for a bbq a couple of days before – I sold him on my attention to detail – it had taken me 12 hours to make the brisket we ate that night – he’d seen my work effort when we were doing the renos – so he gave me a shot.”

Since that day, it has been on the job training. “Brett, Dave, and Don were the brewers in the company – and they would all teach me how to brew – the funny thing was, each of them had their own styles – so I took what I thought was the best of each of their techniques and made them my own.  I’m also finally using some of my marketing background (Boomer graduated university with a marketing degree) – I do sales, distribution, marketing, events….even the bouncer sometimes.”

I ask him if this is the way he had envisioned things going when he first started. “So many surprises since I started this journey. I thought I was just going to brew some beer – sample a few. There is so much more than that. We’re involved in the community. We travel to beer festivals. We’re brewing five times more beer now than we did our first year.  There are so many incredible moments – love seeing people take their first sip at one of your festivals – someone who has never tried our beers before – and in the brewpub – the brewery is behind glass – I’ll be working hard all day, then someone will come over and tap on the glass and give you a thumbs up. Makes the hard work worth it. I can look out and see 200 people enjoying my work. Very rewarding.”

And what does he think about the exploding craft beer scene in Alberta? “I love it. When I went to my first unity brew at Alley Kat 7 years ago – there were only 12 brewers in the province – this year we went to Big Rock and there were 225 brewers there – the brewer’s convention 3 years ago would have been 20 people – there were over 400 there last week.”

Boomer is a man who likes to help – so when I asked him what advice he would give to someone starting up a brewery, this is what he had to offer. “Build it bigger than you think you are going to need. And most importantly, get involved in your community. We have our charity beer program that resonates with people. Give back and you get back. Every time. And don’t stress about whether your beer is going to turn out. When I first started brewing, I’d lose sleep over it. The beer always turns out. Maybe not like you planned, but it always turns out.”

Having tasted the beer Boomer creates, I can tell you the man was always meant to be a brewer – but I’m sure there were those who doubted him when he first started. “I had a high school football coach – Lyle Cullen – he always taught us to believe in ourselves. I’ve taken that through the years – anything I’ve done. Belief and confidence are everything.”

And when it’s all said and done, what will people say about him when he is gone? “I don’t know what they’ll say. I just hope they’ll all raise a glass, be drinking a beer I’ve made – and hopefully everyone is smiling. You know, I’ve always joked that I’d like to be cremated and dry hop my ashes into a beer. Maybe that’s what people will be drinking at my memorial.” And that gives us just one more reason to keep Boomer alive and brewing for as long as possible.

We encourage you to come out and meet Boomer at one of our spring festivals. Check out Banff Ave. Brewing Co., and all the other amazing breweries we’ll have at this year’s events.