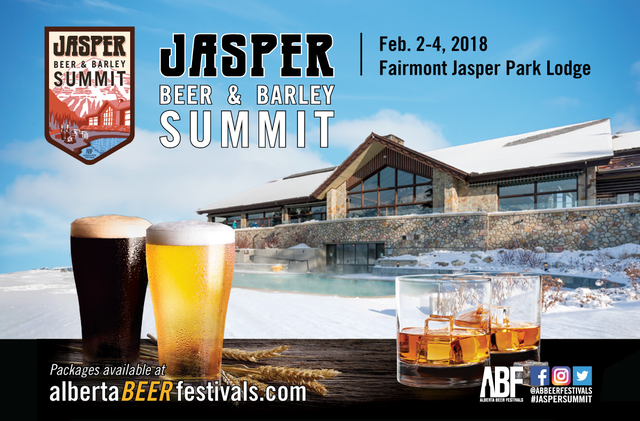 Have you ever found money you didn’t know you had? Maybe a $20 bill tucked away in a pocket you had completely forgotten about? The team at ABF just had that same exhilarating experience – except we found tickets to the previously sold out Jasper Beer & Barley Summit this weekend! The beautiful Fairmont Jasper Park Lodge, where the event is being hosted, is sold out for the weekend – but with their help, we’ve managed to put a few tickets on sale so you can come out and enjoy one of the festival nights or some of the Summit speakers and other festivities!

So What Exactly Is the Jasper Beer & Barley Summit?

We’re glad you asked! The Jasper Beer & Barley Summit, hosted at the world-renowned Fairmont Jasper Park Lodge, is part beer festival, part relaxing adventure. Each evening of the 2 night festival will feature a different line up of incredible craft beers and spirits, as well as succulent food prepared by the amazing chefs at JPL! If you also choose to attend the Summit during the day, you’ll have the chance to listen to incredible stories from some of the top brewers in North America, as well as other very successful people like former NHLer Charlie Simmer and the marketing team at WestJet.

The Jasper Beer & Barley Summit will be like no other gathering on earth. Join the League of Beer, Spirit, & Agriculture Super Heroes in one of the most spectacular and secluded places in the world, February 2th – 4th, 2018.

We’ve put together some incredible packages for this weekend – click the link below to get them now!