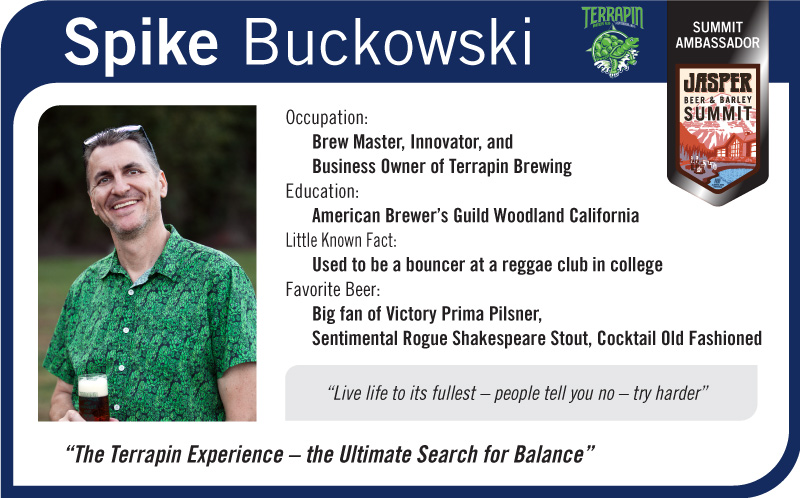 Spike Buckowski, best known as the Brew Master and Founding Partner of Terrapin Brewing in Georgia, is a champion of balance, both in brewing and in life.  From his early days in business, which he affectionately refers to as the time they had to ‘rub their credit cards together’ to get things started, to today, where they recently opened Terrapin’s ATL Brew Lab and Terrapin Taproom in the new SunTrust Park, home of the Atlanta Braves, Buckowski has accumulated a stockpile of valuable lessons and experiences which have helped him become such a successful business leader.

As one of the Keynote Ambassadors at the Jasper Beer & Barley Summit, being held at the Jasper Park Lodge February 2nd to the 4th, Spike will be speaking about ‘The Terrapin Experience – the Ultimate Search for Balance’, using examples from both his business and brewing career.

Buckowski graduated from the American Brewer’s Guild in Woodland California in 1996, but his interest in beer started much earlier. “I guess my first foray into non-mainstream beers would have been a Guinness. I worked in a pharmacy as a stock boy when I was younger – I snuck one out,” he explains before adding with a laugh, “I hated it. Back then I thought it was so dark and strong.” From that point, it wasn’t until after college that his brewing journey took its next steps. “I moved to Atlanta in 1992. I’d never tried home brewing, but since I had a basement I gave it a try. Found out I had a knack for it and started winning some medals in homebrewing competitions. I took a leave of absence and headed to brewing school. Wasn’t hard for me to leave my job setting up AV equipment in hotels – so the hobby I loved became something I got to do for a living.”

Sometimes in life it’s not just where we go but who we meet that ends up shaping our journey. “I met John Cochrane at the Atlanta Brewing Co. Originally we had three partners – we’d gone out to watch the Atlanta Braves on opening day. The next day when we came in, the owner of the company took the head brewer out onto the dock and reamed him – then made us tar the parking lot. The thought of us opening our own brewery started as a joke, but the more we thought about it, the more real it became. Eight months later we had a business plan we were starting to pitch. The three of us decided we each needed to put in $1000 – and the other guy decided that he couldn’t come up with the money so then there were just the two of us. We started contract brewing in 2002 – basically made it happen by rubbing our credit cards together. It took us 5 years to get some investors. As for the name of the brewery, I’m a huge Grateful Dead fan – I have been to a lot of their concerts and listen to them every day. Terrapin Station was the name of their ninth album, and that is where we got the name from.”

Not all brewery origin stories are the same – in fact, if you’re going to survive and thrive, your story better be unique. Still, at their core, all new businesses have similarities. We asked Spike what advice he would give to anyone new to the industry. “Before I went to Brewers School, I volunteered at my local brew pub. I’d recommend you go volunteer at a brewery you like. It definitely isn’t all glamourous – there is lots of cleaning and lots of long hours. If at that point you decide you want to move forward, do it smart. I don’t know if we are going to ever see another Sierra Nevada or New Belgium again because everyone likes local now. If you can see your beer in your own taproom, you don’t need a distributor – better margins. Go smaller to start. How do you become local somewhere else?”

Despite his serious tone when offering advice to those who have recently or might start a brewery, Buckowski has come a long way since his days as a bouncer at a reggae club. “One of our biggest wins happened recently where we got to have a brewery at the new Braves stadium. It’s called the Terrapin Taproom. The laws in Georgia are a little challenging – you can’t own a brewery and taproom – so the Fox Brothers BBQ, who have the best BBQ in Georgia by the way, is who we partnered with. We brew the beer at the stadium, drive it across the city to the distributor, then drive it back to the taproom on the other side of the wall from the brewery so we can serve it. We have a beer called the ‘Hopsecutioner’ – a 7.3% beer at a hot Braves game wasn’t going to work – so we took that recipe, reduced it down to 5%, then aged the beers on the wood chips from the Mizuno bats the Braves actually use. We renamed the beer the ‘Chopsecutioner’ in honour of the tomahawk chop Brave’s fans do at games.”

As amazing as the story about his beer connecting to the stadium and its fans is, connecting is not a new concept for Terrapin. “We use local ingredients – all coffee beers use Jittery Joe’s coffee just down the street from us – a Savannah bee company called Olive and Sinclair in Nashville for our honey – local farmers for fruits – anything we can do to keep it local. We want to continue being at the forefront of using local ingredients in every way we can.”

Not all the lessons Spike has learned along the way have been about brewing. “Be persistent – if you think it or dream it you can achieve it, don’t give up – if you want something bad enough – how long it takes is another thing – but don’t give up. If it was easy, everyone would be doing it.” When asked about a mentor, there is only one answer. “If I was half the man my dad was, I’d be doing something great. He raised two kids up after my mom passed away. He did such a great job with us – in my mind, it will always be tough to live up to his level.”

Looking forward, we asked Spike where we might find him in a year. “Hopefully still at the brewery – my journey isn’t over here any time soon. I live to be the mastermind behind the beers. I love formulating the recipes, then watching them come to life through packaging. It’s a special thing to see one of your own beers on the shelf or on tap in a bar.”

With his love of music, if he wasn’t doing this, he’d be, “A drummer in a band. It’s another passion of mine. And if I could have a beer with anyone, anytime in history, I’d love to share one of my beers with Jerry Garcia – celebrate the fact that the brewery is named after one of his albums.” And as far as a legacy goes, what does he hope people will say about him when he is gone? “Hopefully they’ll say something nice – like, ‘Rest in peace Spike Bukowski, creative genius behind the Terrapin Beer Co. He was a brewer of fine ales and lagers.’ And at the wake, I hope they will be drinking any Terrapin they can get their hands on.”