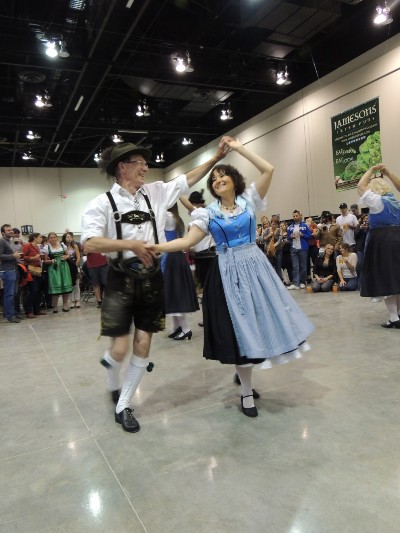 If you’ve attended an oktoberfest before, you’ll know there are a few things to keep in mind so you can take FULL advantage for what  our version of Oktoberfest – Edmonton Oktoberfest has to offer.

Edmonton Oktoberfest has invited some of Edmonton’s best pubs and restaurants to create German and Bavarian themed dishes for the hungry people attending the festival. The portions are much larger than other sampling events, and come with an extra serving of taste! You’ll want to get yourself mentally prepared for the awesome serving sizes. The chefs responsible for the dishes have also paid special attention to the way their fare pairs with the beer selection at the festival. Each dish will pair nicely with a similar brewery, which may or may not infact be from germany itself. You can expect to try some German style pretzels, sausage, sauerkraut , bratwurst, and other German and Bavarian delicacies.

Like most public festivals, dressing up to fit in amongst the crowd is key. You don’t want to dress too conservatively, but at the same time, you don’t want to dress so that you stand out for the wrong reasons either. Traditional German garb is encouraged at Edmonton Oktoberfest. For the men, Lederhosen or leather breeches is the costume of choice, and was considered to be workwear back in the day. Many pints were consumed in these, often made knee length, after a long, hard day in the fields. Women can most often be found wearing dirndl, which is a light circular cut dress, gathered at the waist, that falls below the knee. These quite extravagant costumes have origins as Austrian servant wear from the 19th century. More often than not, the participants and festival goers at Edmonton Oktoberfest can be found wearing these costumes, which are both slightly conservative, and quietly cheeky.

So, you think you can dance?

Edmonton Oktoberfest wouldn’t be much of a festival without the atmosphere, and perhaps the largest contributor to that atmosphere (aside from the food and drink) is the music. Edmonton Oktoberfest has some great local acts, playing traditional and not-so-traditional songs to get you out on the dance floor. If dancing isn’t your thing, you can either watch some professionally trained dancers as they move about the dance floor, or you can learn to do it yourself! The pros will spend a bit of time teaching audience members how to dance in the traditional style.

It’s easier than ever to try some delicious samples of beer at Edmonton Oktoberfest. If you’ve attended the Edmonton Craft Beer Festival, sampling works in the same way. Samples tokens are $1 each for a 4oz pour, and tokens are sold in sheets of 10. According to the AGLC, a legal sample size is 4oz, which is is roughly 1/3 of a bottle of beer. Samples will be a minimum of 2 tokens, with more extravagant beers to be worth more tokens. That works out to $6 for 12ozs, which is a great deal around these parts. Edmonton Oktoberfest will focus on German and Bavarian style beers from local breweries and representatives. In Munich, the home of Oktoberfest, the focus is on everything local, so we at Alberta Beer Festivals feel its a fitting tribute to the original oktoberfest, to do the same.

With all of these tips and tricks in mind, your Calgary Oktoberfest experience will benefit from the knowledge we’re passing on to you, the festival goers. One last piece of advice for surviving the 2014 Calgary Oktoberfest is how to cheers properly. In German, it’s tradition to say “Prost!” when you’ve met up with friends and family!